iOS 9.2 Untethered Jailbreak is in works by the Pangu Team. Pangu Team recently tweeted on twitter that they are working on the untethered Jailbreak for iOS 9.1 and iOS 9.2. Apple released these two iOS versions recently for all the supported iDevices. Each of these iOS versions brought in new features and got some bug fixes that includes the Jailbreak vulnerability used to Jailbreak iOS 9.0.1 was also fixed. However, team Pangu had some exploits on their hand and never released it for public in the form of a Jailbreak tool for iOS 9.1 because iOS 9.2 was in works by Apple and expected to be released soon.

Since Apple has released iOS 9.2 with many bugs fixed and new features added, Pangu Team recently tweeted that they are working on the iOS 9.2 Untethered Jailbreak that will support iOS 9.x.x – iOS 9.2. According to Team Pangu:

We can’t promise an early Christmas.., but we’re certainly working on it..! #liberating2016 pic.twitter.com/bz9cucVBDB

The team doesn’t promise to deliver the Jailbreak before Christmas and they may deliver it till Christmas as a present for the iCommunity. Fingers crossed for the Christmas release of iOS 9.2 Untethered Jailbreak. May be the forth with Team Pangu.

People who are buying used iPhone’s are now complaining that they are getting this error message whenever they try to sign into iCloud with their Apple ID and Password. The error that they get is “The Maximum Number of Free Accounts Have Been Activated iPhone” and this error is a really badarse message for the users. It is because Apple has some limitations on its iPhone for using Apple IDs to prevent fraud like Free Storage per account and many other things. Therefore, Apple has limited the account signups to 3 per iPhone. This means that a person can make up to 3 different Apple ID’s using one iPhone and after that they will start receiving the same message mentioned above.

If you are one of those people who are continuously seeing this error and don’t know what to do and are tired of trying everything that people have told you to do so, then you are at the right place because we have cracked the code behind this theory and we know the exact solution that will make this error of Free Accounts go away.

The solution for this method is as easy as ABC. All you need is to grab another iPhone that can be of your friend or some one you know and make an Apple ID on that phone or you can make an Apple ID online via iTunes PC or MAC. You can follow the guide of making Free Apple ID without credit card.

After you are done assuring, now sign in with your iCloud ID on their iPhone and when its done, then you can sign out.

Now sign in with the same iCloud ID in your iPhone and it should work for you as you would have bypassed this error already.

Apple recently released iOS 9 GM build for developers and public beta testers with the final release scheduled for September 16, 2015. While we are only few days away from the final release of iOS 9 for Public, a well-known iOS Hacker called ih8sn0w teased iOS 9 Jailbreak on his iPhone 5 running iOS 9GM build. The Gold Master build of any iOS is equivalent to the final version of the iOS for Public. The only difference is of availability between both of them. The GM build is seeded for developers to clear it for take off for public.

However, it is amazing to see that some one from the Jailbreaking Community has made some efforts to find exploits for iOS 9 Jailbreak. These days, it’s very rare to see people finding exploits for iOS, especially the old teams like Dev-Team and ih8sn0w. As of now we have two new names in the Jailbreak World namely Pangu and Taig.

We know that Pangu and Taig maybe working on the iOS 9 Jailbreak because Taig Released iOS 8.4 Jailbreak and Pangu demoed iOS 8.4.1 Jailbreak with intentions to release it until iOS 9 is out or maybe they will not release it even after iOS 9 is out because they need to test the exploits on iOS 9 and iOS 9.1.

Moving forward towards the demo of iOS 9 Jailbreak, which was demoed by ih8sn0w on his official YouTube channel.

In near future, we can iOS 9 Jailbreak coming from Pangu or Taig or there is a possibility that both the teams don’t release the Jailbreak until iOS 9.1 isn’t out.

The news of Pangu Jailbreak iOS 8.4.1 comes from a very reliable source of Weibo, which posted screenshots of the Team Pangu showing demo of iOS 8.4.1 Jailbreak in front of the audience. 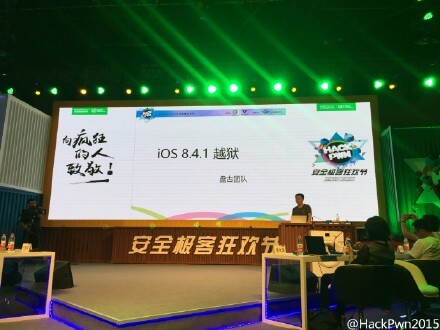 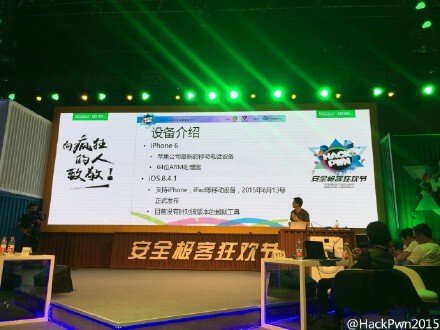 This Jailbreak of iOS 8.4.1 by Team Pangu will not be surfacing the real world because iOS 9 is around the corner and if they release Pangu jailbreak iOS 8.4.1, the chances are high that the patches used to make this Jailbreak will be fixed in the final build of iOS 9 and we don’t want that to happen. The reason that we don’t want the patches in iOS 8.4.1 Jailbreak to be fixed are the delays in finding the Jailbreak exploits and we all are aware of the fact that its hard to find Jailbreak exploits in every new iOS Version that is released by Apple.

Apple has got a good record of fixing iOS Jailbreak Vulnerabilities in its latest iOS versions. In the similar fashion, Apple fixed iOS 8.4 exploits and gave credits to the Pangu Jailbreak iOS 8; team for finding the vulnerabilities.

We don’t expect team Pangu to release the iOS 8.4.1 Jailbreak anytime soon or later because Apple is still signing iOS 8.4 (as of today) and they will stop signing it some time later. Moreover, as we told above that iOS 9 is around the corner and it will be released in September of this year.

Rumors are pointing out towards an official Apple event later in September and we are excited to see the debut of iOS 9 along with a new iPhone 6 model.

How to Fix Error -1101 TaiG Jailbreak

TaiG team working like a machine dropped iOS 8.x.x – iOS 8.4 Untethered Jailbreak as soon as the latest update was pushed out by Apple. Fortunately, Apple didn’t fix the exploits in its iOS 8.4 release and TaiG was able to retain its Jailbreak for iOS 8.4. However, the Jailbreaking world was extremely happy, but TaiG Error -1101 and stuck on 20% or 30% ruined their happiness. Meanwhile the users were searching for an answer; Saurik released series of updates to Cydia and released 1.1.20 version of Cydia with many bugs fixed and stability.

In addition to the series of update by Saurik to Cydia, TaiG also update their tool to add new Cydia in it and fixed the issues of Jailbreak stuck at 20% or 35% faced by many users, but still people complained of having such issues of TaiG Error -1101 Jailbreak failed. 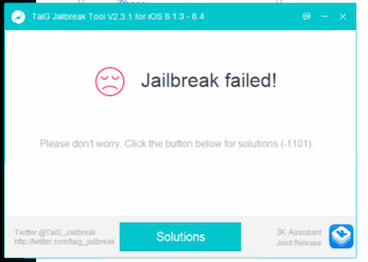 In order to fix TaiG Error -1101 and Jailbreak Failed error in TaiG, follow the steps below and you will overcome all the errors.

The first and foremost requirement of TaiG Jailbreak is to turn off findmyiphone because it is not able to access your iPhone and perform the Jailbreak.

Turn on the airplane on your iPhone because it helps somehow in Jailbreaking your iPhone by Taig. Many people have reported success until this step.

TaiG tool reboots your iPhone when performing the Jailbreak many times. So it is recommended that you should turn off your passcode or touch id for the time being to allow TaiG tool to perform the Jailbreak procedure easily.

Run TaiG as an Administrator in your computer to allow it to make changes in your iPhone while doing the Jailbreak.

Disabling Antivirus allows TaiG to work well because in some cases your antivirus can be the culprit in landing errors.

If any of these steps don’t work at your end, then try our last resort method.

This is a special diagnostic guide made for you to fix TaiG Error. Perform step by step and you will succeed.

You can download the latest version of TaiG from Here.