Every one must be busy in their daily life without knowing that an App called Find and Call arrived the iOS App Store and Play Market as a Trojan. Some of you might have gone through that App or some of you might have downloaded that App because it is free for download. If you haven’t downloaded the App, so you are lucky and if you have accidentally downloaded the App, then you are unlucky. We will tell you why. Meanwhile, the source of this Trojan App comes form the blog of Kaspersky, the Antivirus Company that figured about this Trojan App.

According to Kaspersky security lab, the App was released in the Apple App store and Google Play Market. At first glance, the App looked like a SMS worm spreading a SMS to download the App to every one in the contacts list with the download link. Later on, it was revealed that the App is not a SMS Worm it is a Trojan instead. Now we will tell you why you are unlucky if you have downloaded this App on your iOS or Android platform. 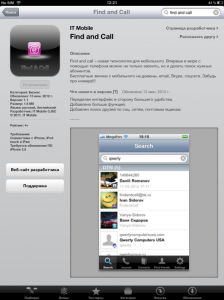 Once the App is downloaded on your Device, it simply uploads the contact list from your address book on the server with the help of remote Trojan. After the upload is done, the Trojan simply sends an SMS to every one in your address book with the Download link of this App and stating the message to download the App from the respective platform because your friend has also download this App. The higher the chances are that your friend might have downloaded the App because the SMS was sent by your name from the remote server.

Now your friend being a good friend downloads the same App Find and Call. The same happens with him. The Trojan uploads his Address Book and sends a SMS to every one in the list with the download link of this App. This is how the Cycle of Download goes on.

Luckily, the Kaspersky Security Lab had reported about the presence of this Trojan App Find and Call to Apple and Google. Now it seems that the App is gone from the App Store and Google Play Market. The story doesn’t ends here. The access of this App in the App Store raises some serious questions against the Approval team of Apps at Apple that how could they allow such Malicious Apps in the App Store.